This patient had already been told by a different vascular surgeon that there was nothing that they could do for her severe pain. The blockages in the arteries in her legs were so severe, no pulse could be felt in her toes. After ultrasound and evaluation, Dr. Goldstein concluded intervention was possible. Using advanced interventional techniques, He successfully cleared her arteries in both legs. Her pain subsided and her wounds healed over time. The team at Pedes Orange County regularly monitors her arterial flow to ensure she remains pain and ulcer-free. 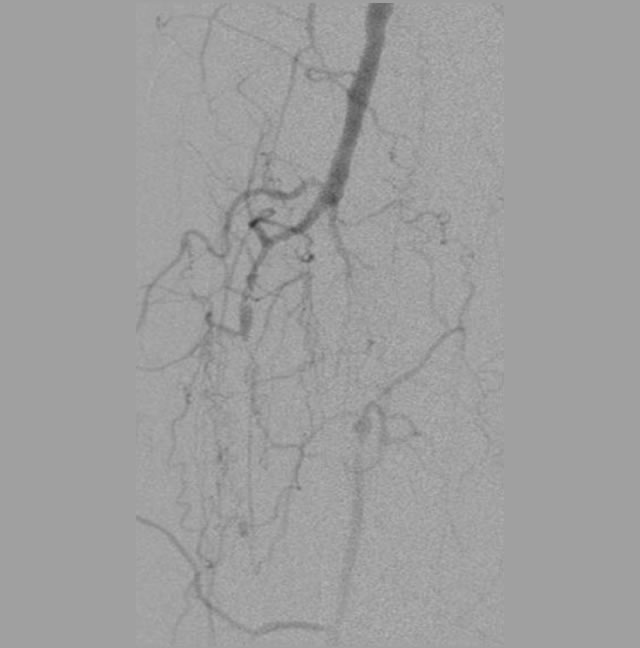 Arterial flow through the right knee and into the calf before intervention. The blockages below the knee are so severe that no clear flow exists down into the toes, causing severe pain as the muscles and tissue starve of blood. 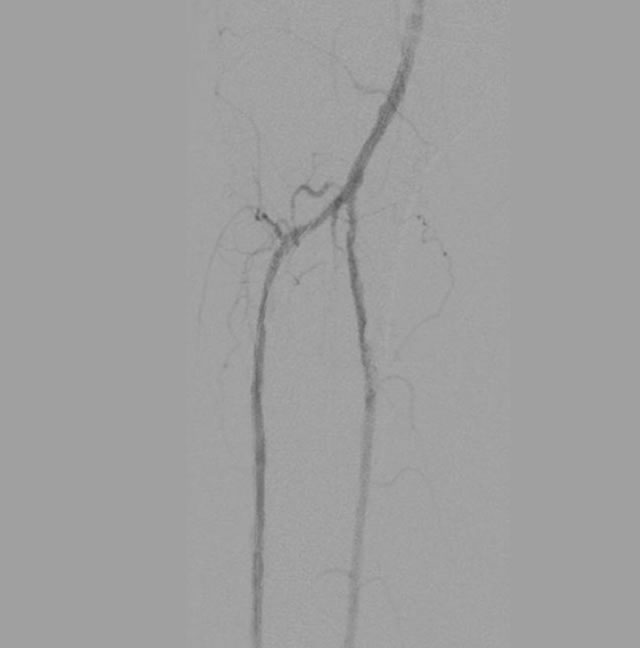 After working to clear the blockages from both sides, Dr. Goldstein establishes flow through the two lower branches of the arteries, allowing blood to flow down into the foot.

Although this patient was first referred for suspected venous disease, his first ultrasound revealed critical arterial disease in the left calf that placed him at high risk for amputation. The tibial arteries- the branches of arteries that deliver blood to the front and back of the calf- were completely shut off, starving the lower leg of blood and causing severe pain. He was scheduled for intervention the next week. After treating the arteries down the leg and into the foot with atherectomy, angioplasty, and stent placement, Dr. Goldstein restored flow through all three arterial branches and down into the foot. Proper circulation was restored, and the foot was salvaged. Since the first treatment, Dr. Goldstein has closely monitored flow through the arteries to maintain a healthy flow. 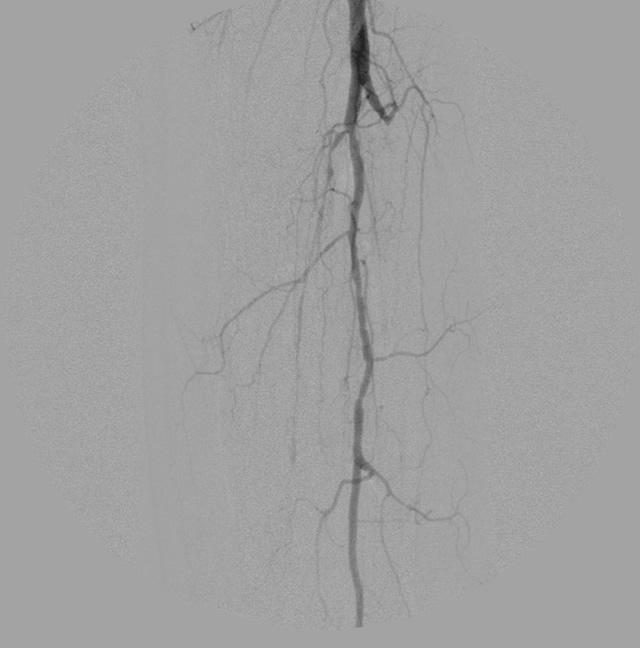 Arterial flow through the calf before intervention. Only one of the three arterial branches exists, with blood being forced through indirect, smaller pathways to feed the muscle tissue. Flow through the foot is almost absent. 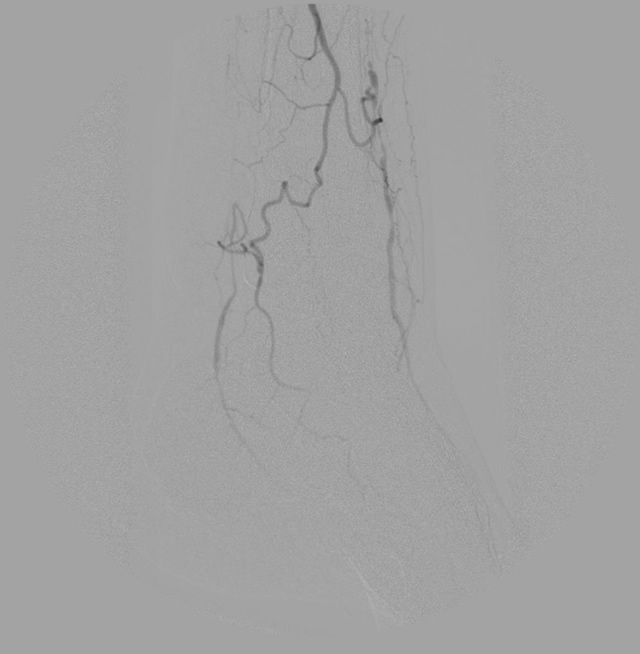 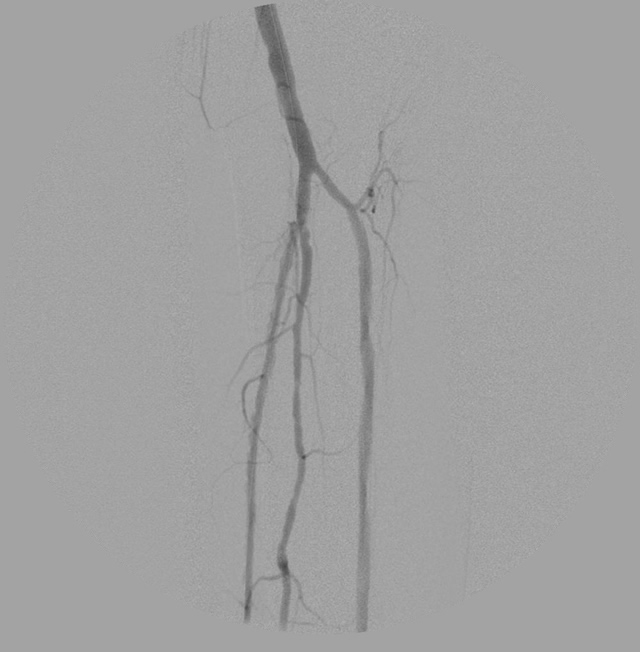 Arterial flow through the calf after the intervention. All three arterial branches are present and flowing smoothly, delivering proper flow to the calf and down into the foot to eliminate the need for amputation. 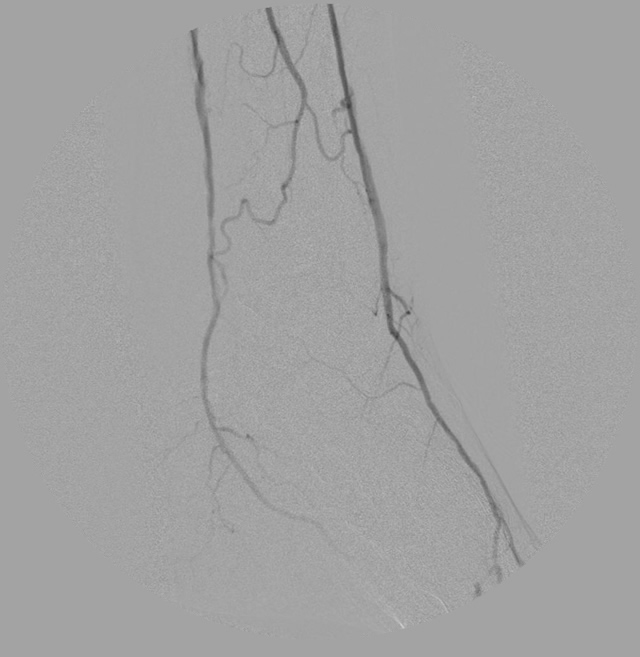 Arterial flow through the foot after the intervention. All three arterial branches are present and flowing smoothly, delivering proper flow to the calf and down into the foot to eliminate the need for amputation.

Diagnostic testing revealed that this patient had only one artery capable of delivering blood down the right lower leg. While two of the three arterial branches in the calf were completely blocked, one fragile artery (her peroneal) had the potential of properly delivering blood, glucose, and oxygen to the calf and foot. Still, it was almost entirely blocked as well. Through diligent atherectomy, angioplasty, stenting, and careful monitoring, Dr. Goldstein has kept her single lower leg artery open and kept her right foot alive. After treating her arterial disease, Dr. Goldstein and Dr. Hewett have treated her venous reflux disease successfully. They have continued to maintain and treat her arteries accordingly, allowing this active woman to keep traveling and enjoy a high quality of life. 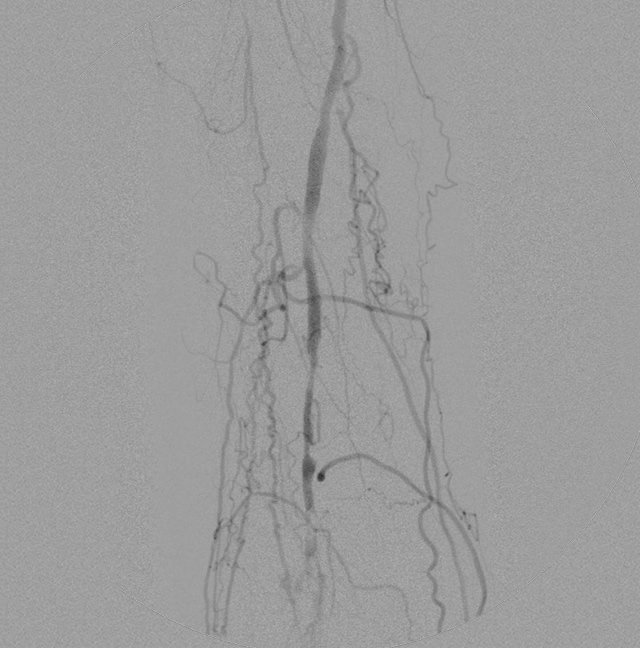 Before treatment, incomplete flow through the peroneal artery forced blood to seep into tiny arteries inside the calf to deliver blood to the starving tissue. 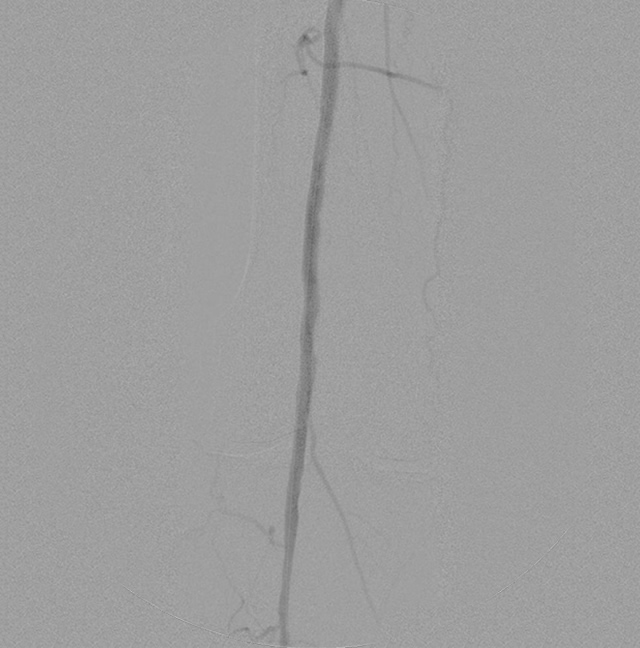 After treatment, the artery has clear, efficient flow down the calf into the healthy foot.

This patient saw so many specialists for his excruciating right calf pain that he lost count. After his first ultrasound at Pedes Orange County, he was diagnosed with critical arterial disease and scheduled for intervention. Only one of the three arteries in the lower leg remained open, and his calf was starving of blood flow. After three attempts at intervention, Dr. Goldstein was able to open up flow into the back of the calf and alleviate his severe pain by utilizing advanced interventional techniques to come from the bottom of the foot and work upwards. Many other vascular specialists would have considered his situation impossible and quickly referred him for invasive surgery. Closely monitoring his arterial flow for follow-up intervention has allowed him to return to a normal life. 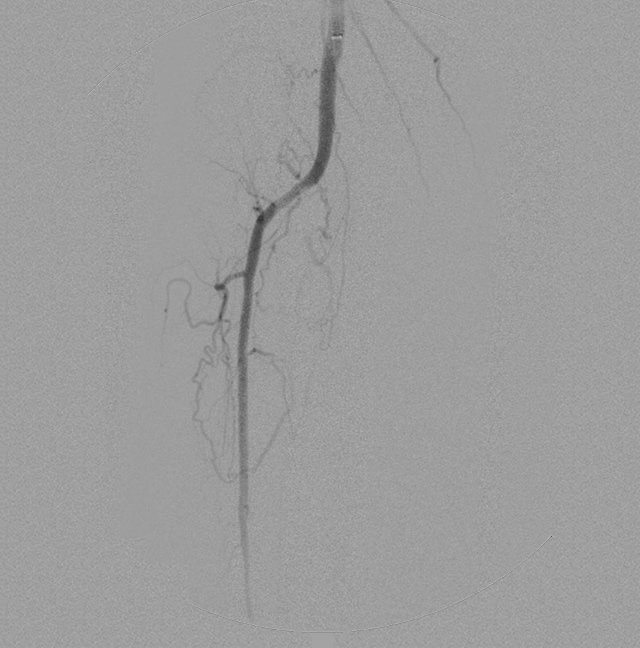 Before interventing, the artery on the front foot flows well, but the lack of flow to the back of the calf causes severe cramping and pain. 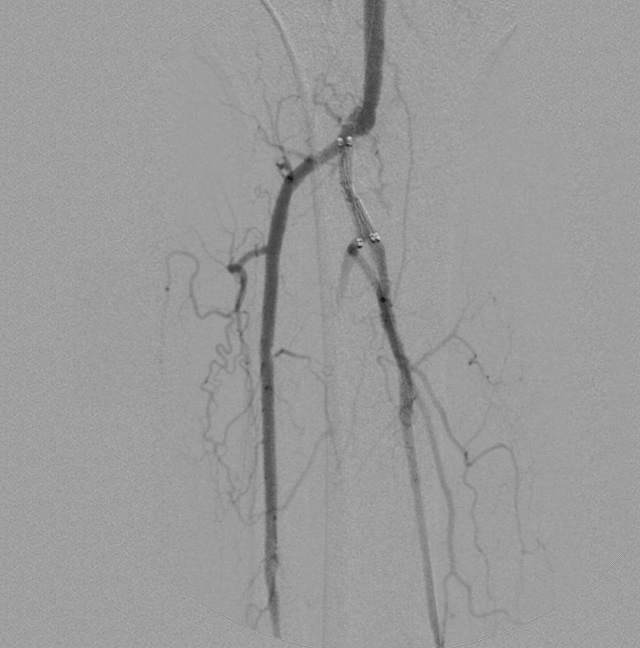 Intervention from the bottom opened the second branch giving blood to the calf muscle and eliminating the cramping and pain.

This engineer suffered a terrible motorcycle accident in which he shattered both legs, almost resulting in amputation. After over a decade of treatment, his bones healed, but the veins in his legs never did. Arterial flow down to the legs was healthy, but the damaged veins failed to bring blood back to the heart. He suffered from recurring life-threatening DVT, severe swelling, miserable pain, non-healing leg wounds, and recurring infections that robbed this man of his quality of life. He went to several specialists, but everyone said there was nothing they could do. After researching online, he found Pedes Orange County, was quickly diagnosed and taken in for venogram and intervention to restore the veins in his lower legs. Dr. Goldstein opened up the veins from both the bottom (upwards) and the top (downwards) with careful angioplasty and stenting to allow blood to flow back to the heart. His swelling and pain were eliminated, his infections and wounds began to heal, and he is now at a much lower risk of life-threatening DVT. After a decade of pain, he has his life back. 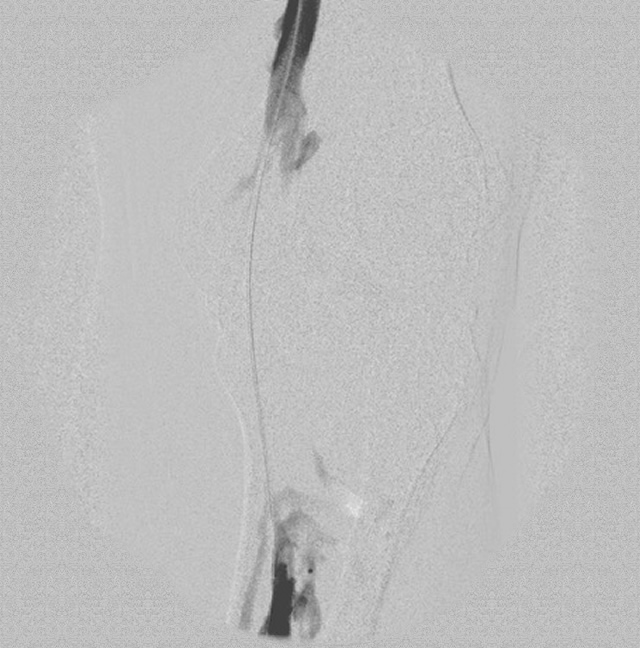 Before interventing, the engorged vein, blocked by the damage, prevents blood from flowing back up to the heart. 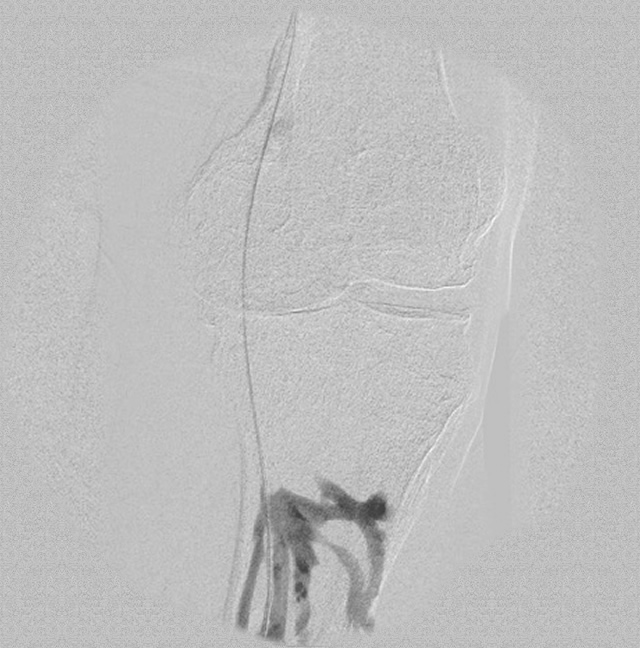 Before the intervention, the engorged vein, blocked by the damage, prevents blood from flowing back up to the heart. 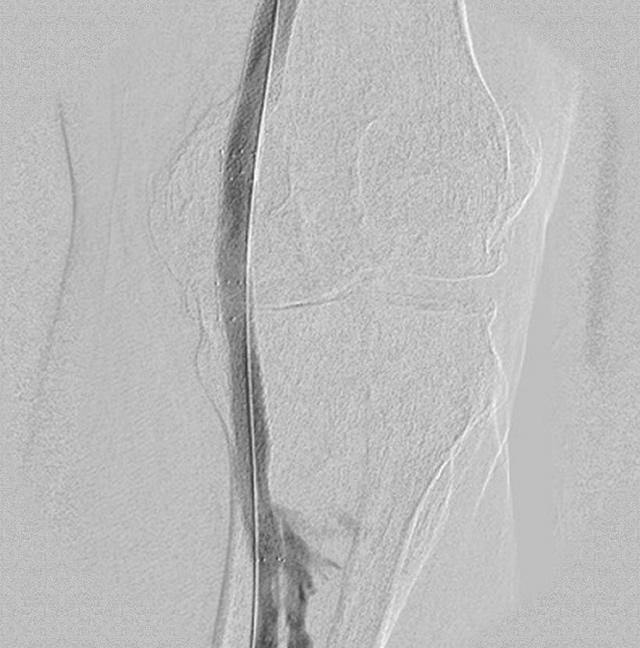 After opening it back up, blood can flow through to the heart and complete the vascular circuit.

Referred by her Podiatrist for Severe Gangrene of the Left Foot

This patient’s left foot was at critical risk for needing amputation or major bypass surgery. She had a “total chronic occlusion” in the main artery in her thigh, almost entirely cutting off blood flow down the leg. With no strong arteries flowing in her leg, blood was forced into tiny side vessels, which could not supply the required amount of blood to the limb. Using cutting-edge endovascular techniques, Dr. Goldstein worked from both on top (downwards) and below (upwards) the blockage to open the artery with atherectomy, angioplasty, and stenting. When most doctors would have given up, Dr. Goldstein’s persistence allowed for the preservation of her foot. The team at Pedes Orange County closely monitors the arterial flow in her leg to intervene when it begins to close again. 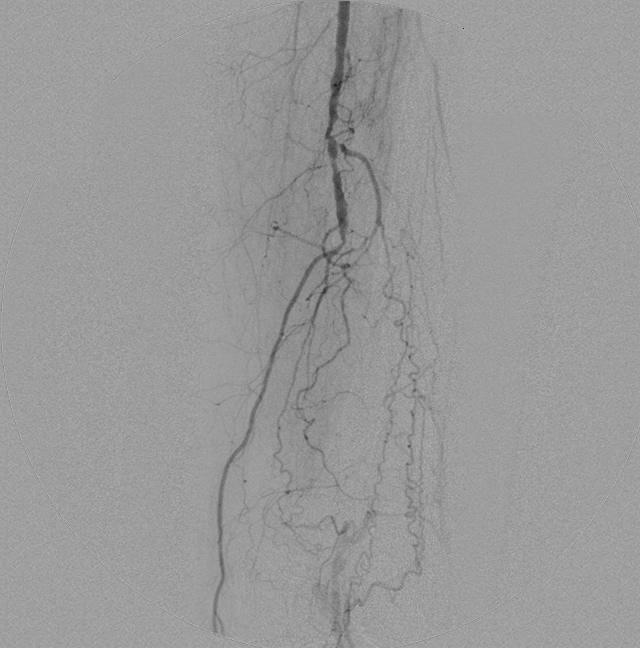 Before the intervention, blood flows backward and around through small side vessels to bring blood down the foot. 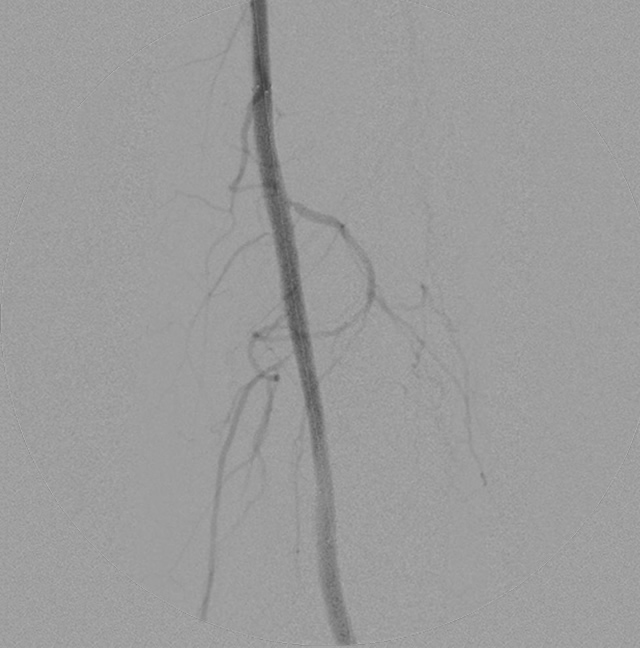 After the intervention, there is an efficient pathway for blood to move to the foot and revive the tissue.

Referred by his Podiatrist for Significant Varicose Veins

This patient suffered from severe varicose veins that caused significant pain, swelling, and minor wounds on his ankle due to the pressure of the varicose veins against the skin. He had worn compression stocking on his own for 4 years without any relief of his symptoms. Because of his discomfort, this patient had significantly reduced his exercise level and was beginning to lose muscle mass in his legs. After his first ultrasound confirmed his venous insufficiency, he received an RVTA (ablation of the unhealthy veins) and phlebotomy first on the right and left. Within 1 month of finishing his treatments, his condition improved, he was no longer in pain, and his wounds completely healed. Our physicians monitor his progress once a year to make sure he remains symptom-free. He has since returned to a healthier exercise routine and has seen healthy improvement in his legs’ skin tightness and muscle mass. 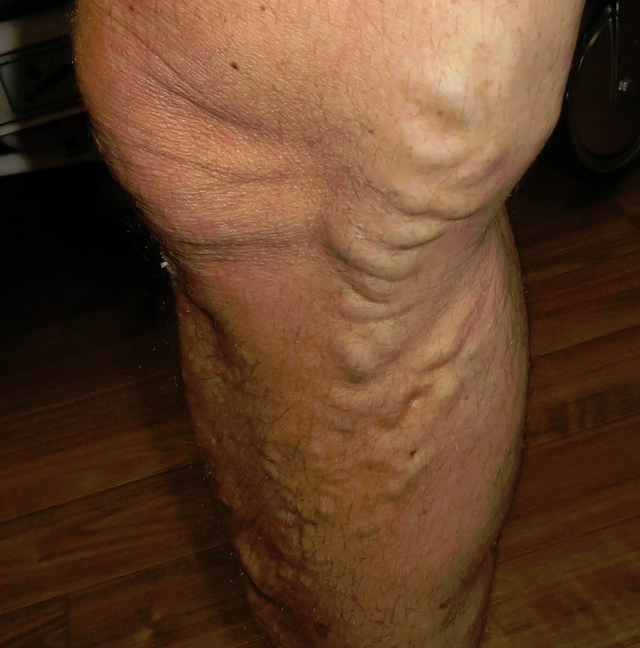 Before treatment, this patient had significant varicose veins. 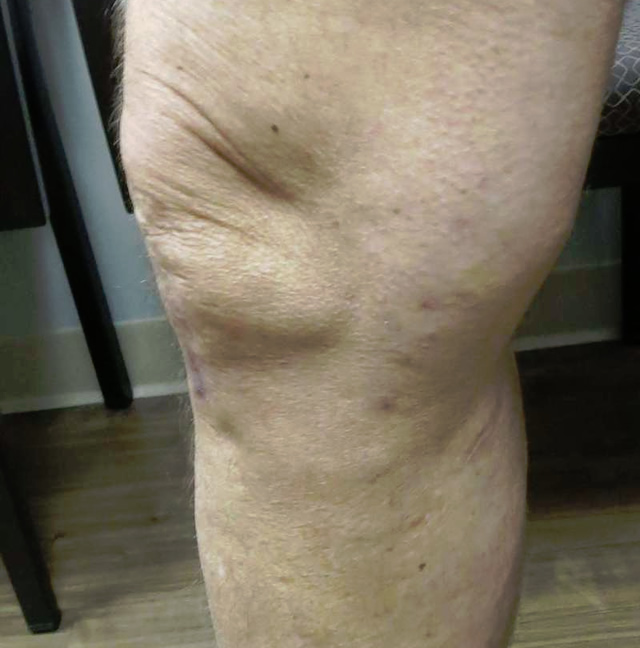 These significant varicose veins were completely resolved after treatment.

Referred by his Podiatrist for Severe Varicose Veins

The patient’s podiatrist ordered a full lower extremity vascular evaluation (arterial and venous ultrasound) to pinpoint the exact causes of his swelling, pain, and severe varicose veins. His evaluation revealed significant venous reflux in both legs, most severe on the left leg. He required treatment with compression stockings for 3 months before insurance could approve further treatment. After compression stocking provided no resolution of symptoms, he was treated with EVTA (Ablation of the unhealthy veins) therapy first on the left and right leg. After receiving follow-up phlebectomy treatment on the left leg, he has enjoyed complete resolution of symptoms. 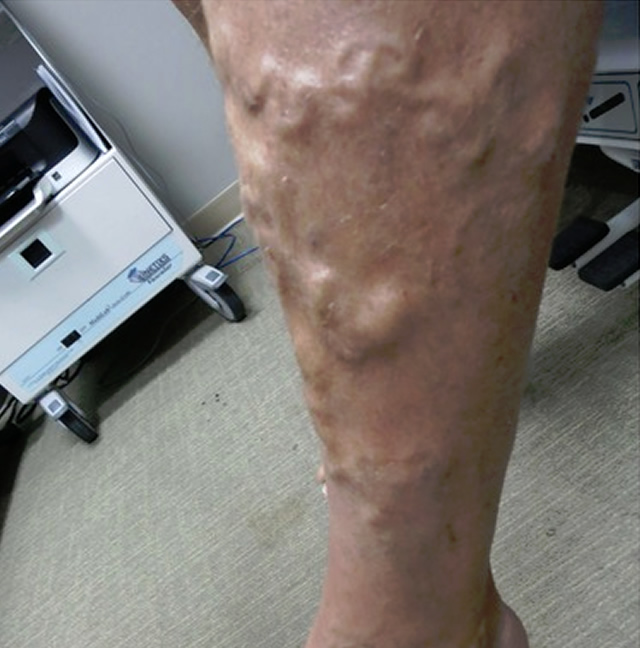 Before treatment, the patients had severe varicose veins causing swelling and discoloration of the skin, the most prominent on the left shin. 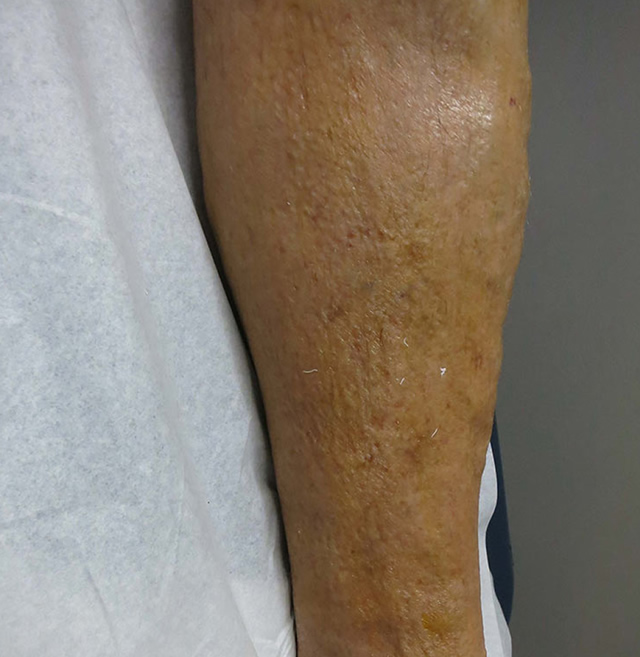 After treatment, the patient’s normal skin color returned as the varicose veins were eliminated.

Referred by her Podiatrist for Gangrene, Non-Healing Wounds on her Toes and Absent Pulse In the Foot

Her podiatrist referred this patient for an emergency evaluation of her left foot. The foot was progressively darkening (turning black due to lack of blood flow), had no detectable pulse, and had two non-healing wounds on the toes. Due to her absent arterial flow through the leg, the foot was no longer receiving any oxygen and was quickly dying; she was at critical risk for amputation. Following her ultrasound, she was immediately scheduled for intervention. Dr. Goldstein treated her arteries with thorough atherectomy, stenting, and angioplasty all the way down into her foot to create a clear arterial blood flow through the limb. With restored blood flow, the color in her foot slowly returned to normal, her pulse returned, and her wounds began to heal. 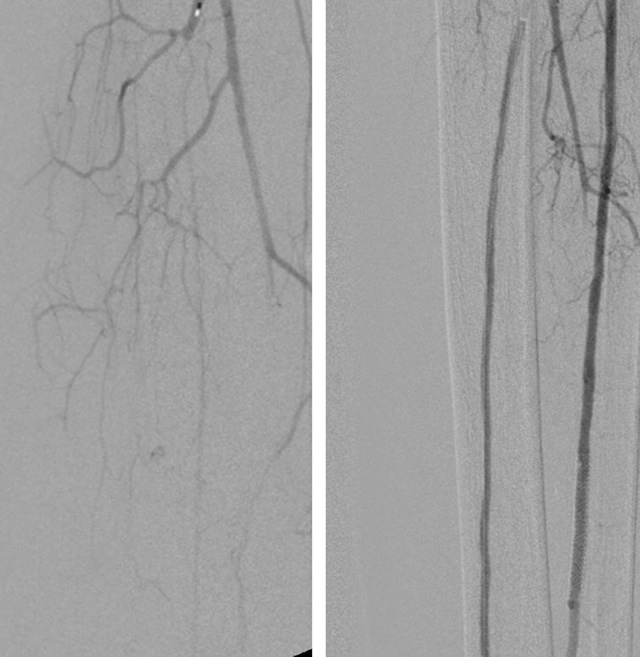